I was just settling in at my sister’s house in Green Bay and I received a call from Dr. Lopez at Comanche Nation College. The topic of this call was to ask me if I wanted to be one of the first graduates from the college. I had already enrolled in a full course load with Cameron University, a course load of all online classes (I had never taken any online courses, much less 4 at one time). She told me that I needed a couple more classes to qualify. I jumped at the opportunity, not only to get a de

gree, but to be a positive contributor to my Comanche community and experience some sort of achievement for myself. But the additional classes would have to wait until the next semester. Also during this time, we decided that we were going to move to Wisconsin, however after our oldest son completed his Senior year in high school. Fast forward 3 semesters later, it is April 2011. I was called that the graduation ceremonies at Comanche Nation College were to be held at the end of the month.

My wife and I were both enrolled at the College of Menominee Nation, and I was working part-time at Duck Creek Coffee, which would be closing its doors soon. I was in a dilemma about my future and also had some concerns for the authenticity of my soon to be awarded degree. I sent out some “feelers” so that I could get some kind of feedback on what I should do as far as if I should attend the ceremony. We were in a financial crunch and I knew the costs that were needed just to get my family there. I wanted to attend. I wanted my family to attend. I did not want to make all the effort in going, and it just be a worthless piece of paper. After having many discussions, we decided that we would attend not only for my graduation, but also to share my son Amos’ 5th birthday with his Oklahoma family.

We packed up and headed out Wednesday evening and drove all night to arrive in Oklahoma late afternoon prior to graduation. After a quick nap and a trip to the high school to watch a baseball game, we got ready to head to CNC. I had little to no communication to anyone at CNC, other than I had missed a dress rehearsal, but not to worry. We would parade in after the school board, administration, faculty and staff. I was told that each of us would be given the opportunity to speak. I had thought of the things that I would say and who I would thank. I had a few ideas in my head that I would say. One was the initial idea of being asked to be one of the first graduates from CNC. I would say that it was my thought to help the college with the accreditation process, to be a positive impact in the future of the college and the Comanche Tribe.

Growing up in Oklahoma I spent summers helping my Uncle Steve do different odd-jobs during the summer. Whatever it was we would do, we would go eat afterward. If we mowed his mother’s grass, she would cook lunch for us, and we would sit and visit with her for hours after 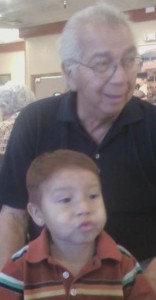 ward. He always told me to watch people, watch to see if they need help. And not to wait to be asked, but if someone does ask for your help, to do the best you can with what you can help with. So when asked to help CNC with completing the accreditation process, I did not hesitate to do what I could.

I was surprised to see my cousin Jeff at the graduation, however it was quite appropriate. After his brother suddenly passed away in June of 2007 from complications due to alcoholism, it was a shock to the family because no one knew how bad his condition was. I mentioned it in my speech that it was an influential event in my life. It was just a few years earlier that Jeff and Greg celebrated graduating from Cameron University. After the tragedy of losing my cousin Greg, I decided that I would return to school to finish my education, in his honor. We never know where life will lead us or when it is our time to leave.

Certainly not last or least, I thanked my family for all the support and encouragement to get to this point in my life. I was blessed that all my boys, three of my aunts and two uncles were there to celebrate with me.

I knew that my Dad was there in spirit, quietly proud of his son.

This message is only visible to admins:
Unable to display Facebook posts